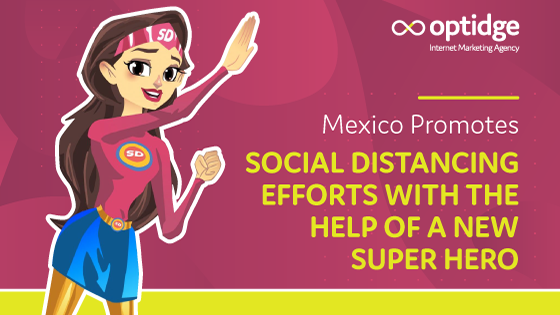 It’s a bird, it’s a plane, no it’s Susana Distancia!

From radio, and television, to Twitter and Facebook, this superhero cartoon character has been appearing as a part of a public service announcement throughout all Mexican media since the initial outbreak of the coronavirus. Susana’s message has remained the same: stay a safe 6ft distance from each other at all times.

Dressed in her flashy yellow, pink, and blue superhero outfit, Susana stands in a transparent bubble with her arms outstretched designed to represent the importance of her staying 6ft away from other people. She’s urging all of her fellow Mexican citizens to follow her lead and do as she does.

Even her name ‘Susana Distancia’ is a play on words in Spanish. Su-sana-distancia (your healthy distance).

If this type of cartoon-like approach to COVID-19 seems odd, the Mexican government has had a long history of using humor as a marketing tool when trying to convey serious messages such as H1N1 back in 2009.

The Mexican government has faced a lot of challenges in trying to convey the danger of COVID-19 but it’s nothing they’ve never handled before. For instance, Mexico City is one of the world’s largest cities and is a particularly high-risk area for pandemics due to its incredible density but it has a very low literacy level. This has posed a tremendous challenge in the past, until animated, cartoon-like characters such as Susana were found to be incredibly popular and seemed to get the message across.

As proof, Susana’s Twitter account opened on March 20th, and by March 23rd she had 30,000 followers. Her popularity has increased so much that she’s offering tips of what to do while in quarantine.

Mexican health authorities have understood that risk communication and marketing always have to be adapted to the local context in order for the message to reach as many people as possible. Susana Distancia fits into that way of communicating beautifully.

View the outpour of Susana Distancia drawings on social media

Find out how Optidge can help you